Facts at a Glance About Alien Swirling Saucers:

As you hitch a ride from your local alien driver, multiple things happen at once on this spinning ride. Ride cars are moved along a track in a circular motion and at the same time the vehicles slide from side to side. The effect employs centrifugal force to cause riders to slide around as the vehicle spins and whips around the central alien ‘driver’.

Nighttime rides are different in that there are 8 different lighting packages that go with different songs. Each time you ride you’ll experience one of those 8 different packages. At night you get the full effect.

The line for this attraction is very plain which is an exception to the rule that says Disney lines are fun, interactive and part of the story. The outdoor queue begins uncovered, so guests should be prepared to wait outside in the sunshine. Some trees do offer a little shade, but this is not extensive. As you get closer to boarding, the line is covered. The line winds around the outside of the attraction and then leads into the loading area. Here is where the standby and Fastpass lines meet.

Although this is one attraction there are actually two ride systems in place, so at the point the line reaches the cast member at the front, guests will be sent one of two ways. The experience is exactly the same from all ride vehicles so there is no need to aim for a specific side or position.

The cast member will direct parties in groups of two people (or solo riders) or two adults and a small child. You will be directed into a holding area with other guests who will be boarding at the same time as you.

When the previous ride has finished and guests have exited, the gates of the holding area are opened. This moment can become a little disorderly with people running for their preferred seat. However, there will be enough seats for everyone, and all rides are the same, so take your time finding a free seat.

The seats are bench seats and the ride vehicle is open at the sides (hold onto your bag!) there is a simple lap seat belt which pulls from either side, across the laps of all guests to join in the middle. 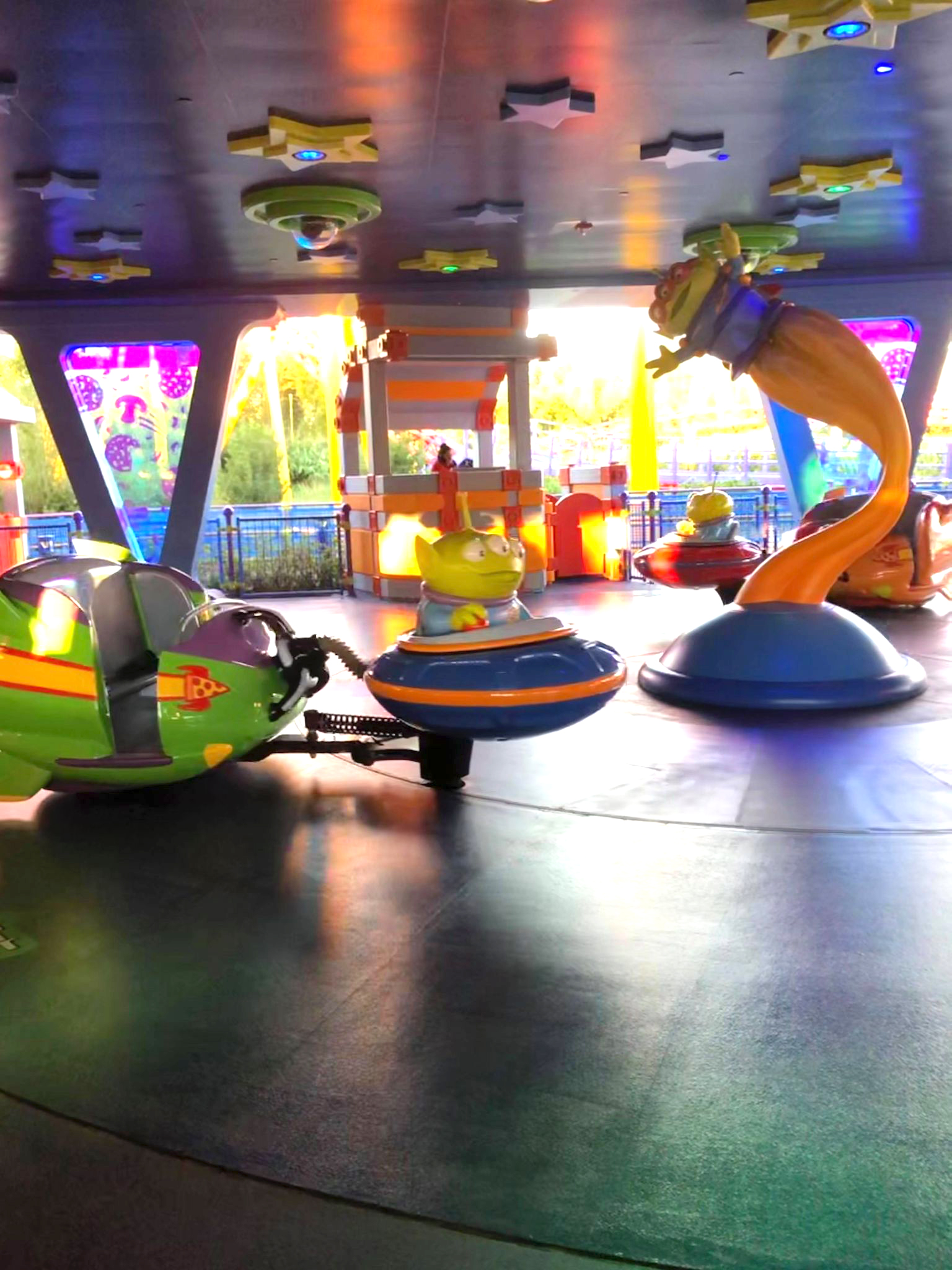 Wheelchair/ECV and disability information: The queue is accessible. Guests must transfer to a ride car. There is a short step up and over the side of the ride car. You can request the ADA ride car which has the side sliding back to open up the side further.

The ride is best understood by breaking down how it works. There are a number of round plates on the floor which the ride cars are on, which rotate. As the plates turn the ride vehicles move as if they were moving around a clock face. At the point at which two plates meet (they are placed on the ground so if you traced the outline it would look like a figure 8) the ride vehicles transfer from rotating around one plate to the other.

The ride cars are in two parts. The alien sits in a fixed section in the front part of the vehicle, and guests sit in a trailer attached to the fixed section. As well as the spinning movement of the plates, the circular direction of travel and the way the cars cross over the plates causes the trailer you’re sitting in to also move side to side around the fixed car. When the trailer reaches the limit of the movement – 180 degrees – the trailer cannot move any further and guests are forced to slide across the car in a sudden and harsh movement, before the trailer spins back the other way. 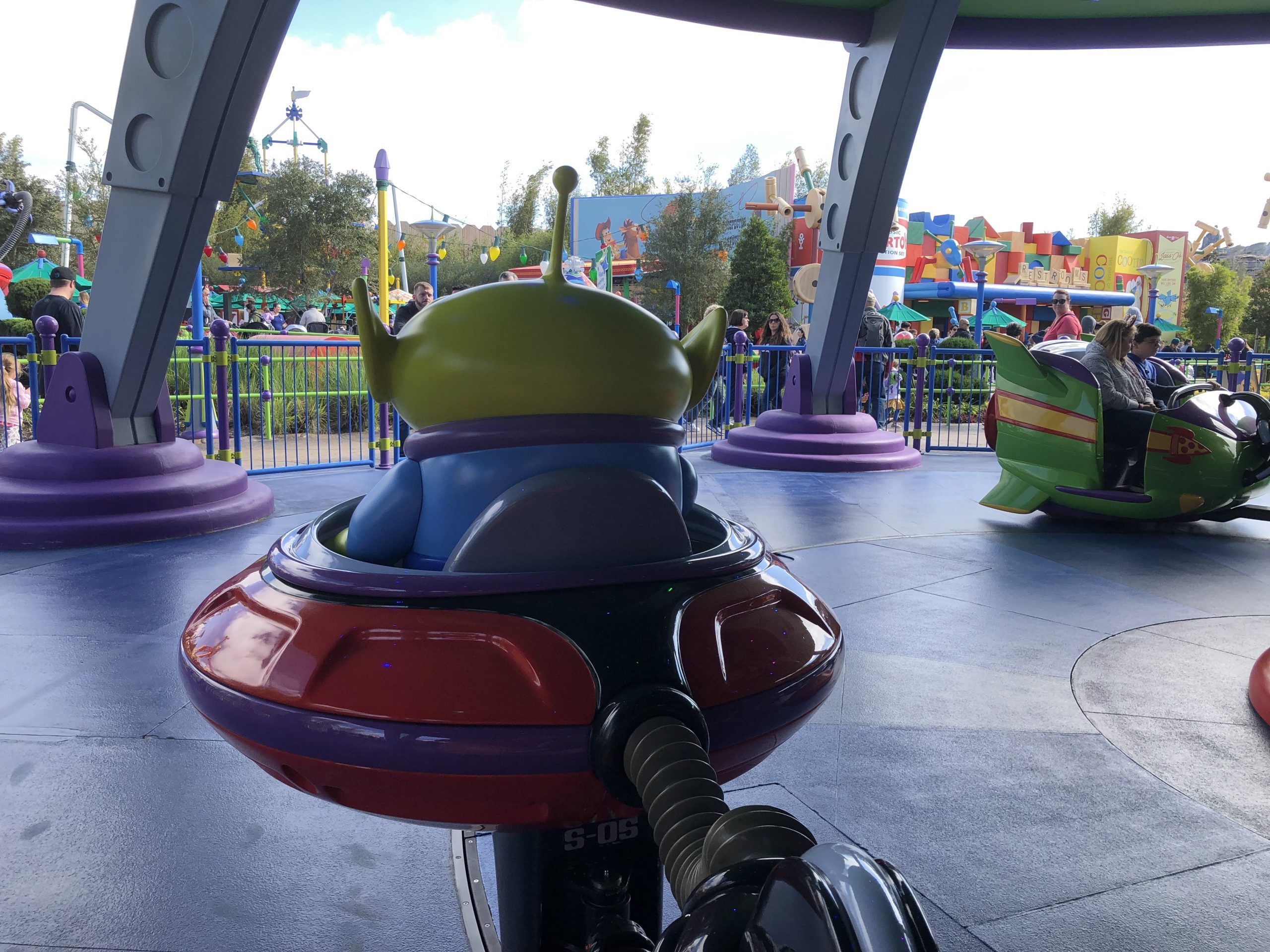 The experience starts with the music of the arcade as the round plates slowly start spinning. As the speed builds up the trailer where guests are sat moves from side to side, eventually making guests slide around in their seats.

It is not an intense ride for thrill seekers, but there is not much security in the bench style seats so riders need to be comfortable sliding around, bumping the sides of the seat and into each other.