For those who can’t handle rough rides, physically challenging rides, or spinning rides, there’s still plenty to do at Disney World. Here are some options in all four of the Disney World parks that are considered more gentle and non-spinning. Meet and greets are not included, but of course all of those are considered gentle experiences.

If we’ve left some rides off the lists below, that’s because there’s something about it that we think may be physically difficult for some people. For example, Tomrrowland Transit Authority (Peoplemover) looks gentle and most of the time it is, but the ride includes a bumpy, jerky track with some quick sharp turns that can be challenging for those with neck problems, weakness, etc.

Of course remember that what’s okay and gentle for one person, might not be okay for another. So please remember to check out each ride in advance to make sure it’s okay with your condition, and check with your doctor.

One other thing: For complete descriptions of all the rides including the physical and emotional feel and experience, check out our Disney World Rides section.

Before we start, if you’re physically sensitive to any kind of jolts, there are a couple of things to know about most of the boat rides on attractions like It’s a Small World and Living with the Land. First be aware that the boats can knock into one another at the start and at the end of the rides. This can cause some jolting. Most people will consider it minor. Also when the boats take off and arrive, they can pass over some rollers which can make a brief period of mild bumpiness.

In our experience, the more gentle, non-spinning rides in MK include:

*Haunted Mansion is a smooth ride with sharp inclines and declines. The seats tilt back when you’re going backwards down a steep decline. The ride car ‘roof’ curves overhead, which may cause awkwardness depending on your height, and could cause discomfort for some – especially those with neck issues. My wife carries a sweater to use behind her neck to make it more comfortable.

**The Many Adventures of Winnie the Pooh has a simulated bouncing effect that may be a bit too much physically speaking for some people. There is a handicapped vehicle that can have the motion turned off, so guests who wish to avoid the jumping and rolling motions can do so.

***Tom Sawyer Island is a walk through attraction. It’s a kind of a playground and a place to hang out and explore. Most of it is not accessible, though you take an accessible raft across to the island, and you can relax in the accessible area.

Other gentle Magic Kingdom rides and attractions that may be okay for some:

Buzz Lightyear Space Ranger Spin is not on the list, but it’s a pretty gentle ride. The issue is that it turns on its own at some points, in order to face you in certain directions. It’s a reasonably gentle motion, and personally I wouldn’t consider it a spinning effect, but it may be uncomfortable for those who are sensitive to this type of motion. Also there’s a “joy stick” that allows you to turn the vehicle by itself, so you control most of the turning motion on the ride. We find that if the person who is sensitive to motion and spinning controls the turning that the guest is allowed to control during the ride, it’s often much more comfortable and tolerable for them. My wife who has vertigo at times and can’t handle spinning does fine on this ride.

The Swiss Family Treehouse is a display where you walk up 116 steps to tour the Treehouse. While there’s no motion, it’s a lot of steps! It is not accessible.

Tomorrowland Transit Authority is a ride that may be considered gentle for some, but for others it’s too challenging. It is not accessible. Guests must be able to walk by themselves or assisted by a member of their party up a steep moving walkway to get to load platform, and onto a flat moving walkway to board. Getting off involves a moving walkway and going down a steep moving ramp. The ride includes a bumpy, jerky track with some quick sharp turns, and times of complete darkness

In our experience, the more gentle, non-spinning rides in Epcot include:

Other gentle Epcot rides and attractions that may be okay for some:

Spaceship Earth is probably okay for many people but it does have a bumpy track, and the ride cars travel uphill and downhill on steep angles for extended periods of time. Some people have difficulty with being reclined against the hard seat and awkward headrest during the backwards portion of the ride.

In our experience, the more gentle, non-spinning rides in Hollywood Studios include:

In our experience, the more gentle, non-spinning rides in Animal Kingdom include:

* For It’s Tough to Be A Bug, please note that guests sitting on the attraction seats will experience a quick jab in the back. You can avoid this by sitting forward and not leaning on the back.

Thank you to Melissa Cruikshank for providing the photo in the header image! Much appreciated. 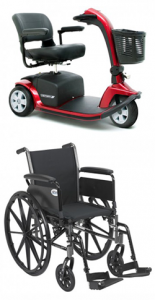 NEED TO RENT A SCOOTER or WHEELCHAIR? We recommend Buena Vista Rentals.

Our readers get a FREE ACCESSORY with rental.

CHOOSE FROM OUR ARTICLE CATEGORIES